I know I should be busy packing right now, but my fingers feel the urge to blog.  Yup.  I'm addicted to blogging.  Bunny will not be impressed when he catches me stuck in front of my laptop again.  Earlier this afternoon, he snugged up behind me as I was studying a picture about the Texas urban legend of the Donkey Lady after I read about it from The Cowardly Feminist blog "Glutton for punishment".  I was thinking that the woman in the picture looked much more like zebra fish lady than donkey lady (but I have to give it to them for the history and story about the crazy ghostie) when he said, "Now what the HECK are you watching now?"

Me: Donkey Lady.  It's kinda like that recent horror flick "Mama" but she got that way from being burnt and shit.  This looks like a fish lady though.  Like that character from that Japanese cartoon I showed you where the cute penguin turns out to be a fly devil that loves to eat shit (yes I love to watch twisted funny stuff).

Bunny: ...I'm just gonna walk away and stuff my face with cinnamon bun trying to block out what you just said.

So I was left with my thoughts again.  Donkey Lady...that doesn't sound as scary as I think.  It's like the Donkey from Shrek getting the "zombiefy" treatment from the recent popular zombie apps.  So I gave it a try: 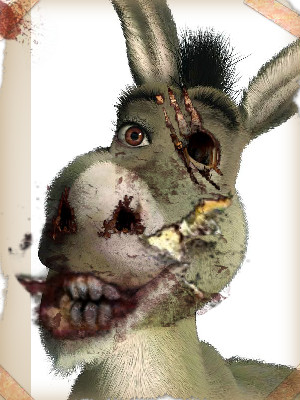 Yup.  Not scary at all.  Maybe I'll debate whether it'll give me rabid if I see something like this charging at me though.

On other notes, I thought I should make up my own list of 7 things to never buy used after I read a list made by the Yahoo Finance writer Farnoosh Torabi.  To save everyone the trouble I'll just summarize this list:  Helmet, Laptop, Software, HDTVs, Tires, Car Seat, Bedding.  Rather sensible but a little dull, don't you think?

1) Condoms.  That's a given.  Unless you want a baby and skip the whole finding a guy to marry and be the father to your baby routine, and you know the guy who wore this condom has an IQ of 200, does not have any sexual transmitted disease nor genetic disorder, and physically look decent.  Then it is a super deal.

2) Used Playboy magazines.  Yup.  All those white pasty marks and glued pages aren't defects from the printing press.  It's the worst if those used playboy magazines came from the Sperm donor clinics.

3) Used panties and boxers.  Gross.  But then I heard there is a rampant market where kinky guys would pay high prices for used undies.  I feel sorry for the post office people who has to handle all these smelly undies in the mail.  Gaaah!!!! And mixed with our CLEAN mail!!!!!  Shit.  Now I must wash myself with Dettol every time after checking my mail.

4) Used hemorrhoid cream.  No need to explain more. ESPECIALLY NO if you are applying the cream to shrink your eye bags.  You'll most probably end up with a horrible pink eye infection.

5) Used cellphones and tablets.  You know everyone take their devices to the bathroom right?  Those things are covered with so much fecal matter that they are IN the device.  It's the worst when it comes to cellphones.  Think about it next time you hold up that phone and press it against your ear or your cheeks.  Yup.  You just wipe a whole bunch of poop particles on your face.  Even if you don't, if someone give you that polite French three cheek kisses will transmit their poop matter onto your face.

6) Used workout DVDs.  If they're on the used market, that means it sucks and the previous owner either hated it or that workout totally failed to make an impact on those muffin tops.  Sure they may tell you they just got too used to the workout and got the new series, but it's really a lie.

7) Used nose hair trimmer.  The thought of sticking a used hair trimmer up your nose already send me haywire with scary thoughts.  That thing may dig a hole out of your nose like the Alien babies for all you know.  Besides, the instruction says it's for nose hair, but people tend to use it for other areas of their body when they are desperate.  Other areas meaning areas related to pubic hair. 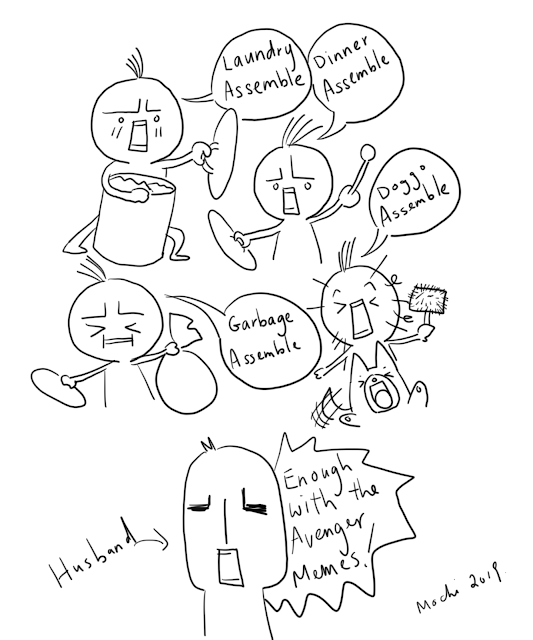