Never Say "That'll Never Happen in Real Life" When You Watch A Movie!

- April 15, 2013
This past Sunday was my bunny's birthday.  And being the "non-processed food nazi", he wanted a homemade birthday cake instead a store-bought one (that meant much more work for me...yah!!).  Since he was king of the house for the day, I had no choice but to comply.  As I googled for online recipes, I pondered on whether to make him a simple cake or to go over the top and make him a three layer chocolate-addict's utopia cake just to show him how much I love him.  At the end, my over-achieving super-ego took over. 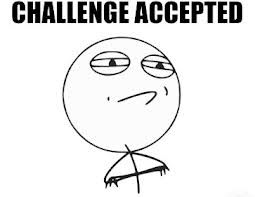 That began the process of baking three layers of different chocolate flavor cake, cooling them down, icing the top of the layers with chocolate butterscotch icing, carefully stacking them very so neatly on top of each other without breaking them, and finally icing the shit out of the outer layer of the cake (all the while batting my bunny away as he wanted to take a bit out of the corner of a layer of the cake).

At last after all that were done, I took a step back and was beaming with excitement as if I had scaled the Mount Everest (I kid not, this cake was the mother-load of all chocolate cake as my bunny declared this morning as he continued to plow through that chocolate heaven).  I couldn't believe that I had done all that without breaking the layers at all.  Gingerly I lifted up the whole cake as if I was gonna if I were to have a baby and it was the first time holding him/her, and cradled it towards the fridge.  I was just going to declare this as an Instagram/Facebook glory moment, then EEPS!  Yup.  A loud eep was all I could afford.  I tripped over my puppy who wanted a piece of the pie.  SPLAT!  That cake was implanted in my gut.  Literally.  The left lower corner of the cake was completely mushed into my stomach.  At that moment, my mind went "Karma!".  Yup.  I shouldn't have point my finger at Sarah Jessica Parker when she slipped and flopped her cake thingy on herself in the movie "Family Stone" and hollered, "That'll never happen in real life!" 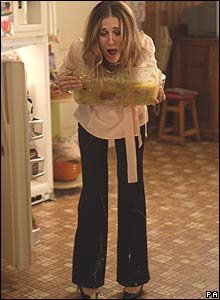 At the moment, I could have been pissed with my puppy but I couldn't (as we all know puppies have those classified super endearing looks that only activate when they feel the situation as life-threatening).  So taking a big sigh, I sauntered off to change my Tshirt and sauntered again off to the office to let Bunny know about the news.

As I opened the door, he took one look at me and asked if the cake was still edible.

I only said,"I tripped over Max".

Bunny:"So it is still edible?"

Me: "Well Max is not wearing it.  A corner is on my shirt"

Bunny: "Told you earlier you should just give up the corner.  See now, no one gets it.  Guess I'll have to eat the cake without the corner."

I should have given him that corner.

Other than the missing corner, the cake is pretty darn amazing if I say so myself (especially when I am not a chocolate fan). 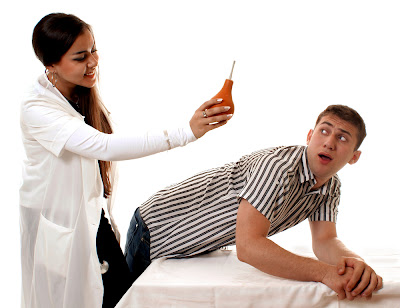